A poll immediately after the independence debate last night suggested Alex Salmond, the First Minister of Scotland was a clear winner. A Guardian article today explains that “Salmond’s win over Darling was one of style over substance.” Just like the phrase ‘empty rhetoric’, ‘style over substance’ dismisses the sophisticated role that rhetoric can play. In my opinion, the arguments from both Salmond and Alastair Darling were broadly on par- so how did Salmond ‘win’ the debate, if not the argument?

It’s always interesting to look at real examples of rhetoric and I have written before about how the best way to look at any type of persuasive writing is not to feature spot but to identify the argument and then see how language supports that. Salmond’s victory comes from the way that his language is used to support his message- Scotland should be independent from the UK and I should be trusted to take you there. Darling does strike some blows but not enough. (Before I get stuck in I must point out that this is neither a YES or NO blog but a look at some of the language used in the debate. I wouldn’t try to read more into it than that.)

The referendum is about a country but for this debate and for much of the campaign it has been about two men: Alex Salmond and Alastair Darling, leader of the ‘Better Together’ campaign. Very quickly in the debate, Salmond seems to seek to establish himself as a man of the people. When commenting on currency, he uses the Scottish-ism “We pay our messages”, emphasising his Scottish credentials. He later begins to describe debts as “enormous”, before switching to the less formal “ginormous”. This does again reinforce his ‘Hey- I’m just like you’ schtick. Alastair Darling, who is not blessed with a Scottish brogue does, rather uncomfortably, say “haud on” later. In trying to evidence his own Scottish credentials, he does the opposite.

Salmond uses the old ‘walk in front of the podium’ technique a little later on.

Once again, the message being I’m one of you. It felt a bit cringeworthy to me but it shows that Salmond is crafting everything about his speech. The barrier between him and Alastair Darling is further emphasised when Darling has to lean forward to be seen by the camera. Salmond adopts a relaxed posture when listening as Darling jabs a finger at him. In all of these exchanges, Salmond is isolating Darling, categorising him as the outsider- the overbearing yet distant authority figure who represents the UK Government. 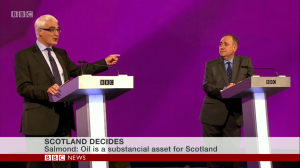 Of course, we all hope the debate is more than just “I’m like you so vote for me.” After all, Darling does say “this isn’t about me or him”. (Although he did say before that “If I lose and he wins…” so maybe it is!)

So often, persuasion comes down to ‘we’. Who are ‘we’ and how can I make sure that you and I are part of this ‘we’ together? In this debate it is very interesting as both Salmond and Darling are careful to make the ‘we’ of this debate mean Scotland. However, Darling means Scotland with the rest of the UK and Salmond means without. So how does their language reflect this? Well, this is where I think Darling is quite effective. Darling manages to structure many of his arguments so that the solution can be seen by widening things out to the whole of the UK. He uses the phrase “UK-wide” more than once and later says: “Not just from Scotland but from all over the country”. He makes problems in Scotland easily solved when you take into account the whole of the British population. This ‘expanding’ of the debate also works when he is talking about Trident, the nuclear weapons development. When Salmond talks about solving a problem in Faslane, perhaps to emphasise the familiarity with a local issue (as he also does with the Ferguson Shipbuilders), Darling makes this a problem for the whole “West of Scotland”. “We cannot afford to lose £8000 jobs” he goes on to say, expanding it even further from a region to a whole country. The core message of “Better Together” informs the argument and the way it is structured. In doing this, he also makes the ‘we’ both Scotland and the UK.

Salmond repeatedly uses the phrase “The sovereign will of the Scottish people”. Darling criticised Salmond’s “smart lines” at the opening of the debate but it is a very simple way of laying the foundations of the argument that ‘we’ should have full jurisdiction on our own affairs. Salmond definitely has more of the lines but a simple line can be incredibly powerful and linger longer than a well structured argument. Salmond even speaks in hashtags at the end: “#teamscotland”.

Salmond has to tread a fine line between independence as a positive thing and as a divisive thing. He needs to use language to identify the UK as other but needs to avoid the negative tone too much as this will likely deter undecided voters. The Better Together- NO- campaign can then be left to be the negative party.

One way that Salmond does this is by referring to Trident as “weapons of mass destruction”. Here he is strongly arguing against nuclear weapons of course but the phrase has a wealth of connotations, and is especially prudent for Darling, who was a member of that Labour regime. In another heavily loaded phrase, Salmond in his closing speech claims that we should “rise and be a nation again”. Once again, this phrase, taken from Flower of Scotland, helps to build a warm sense of patriotism but let’s not forget that the verse concludes “That stood against him/Proud Edward’s army/And sent him homeward/Tae think again.” Far from being simply “smart lines”, these are words as full of meaning and are weapons of destruction themselves.

Salmond always refers to the UK government as “Westminster”. If Darling wants to emphasise that we should be included in the union for our own good, Salmond wants to emphasise that the UK government is isolated and distant from Scotland, even going so far as to say “Westminster is indicted”. Metonymy, personification: Salmond uses metaphor quite effectively here, although he does stray into cliche at other points. (“one trick pony”)

Knowing this approach from Salmond, Darling has to distance himself from the UK Government and he does by saying “I don’t agree with the present government’s policy” and that the bedroom tax is not good. However, by doing this he actually just reinforces Salmond’s point that “Westminster” makes decisions we don’t agree with!

I would be saddened if voters made their mind up on the big issues based solely on how a speaker performed on a debate, and I am not sure if anyone in the ‘no’ campaign will switch sides based on some stylistic flourishes. However, it is a dangerous game to dismiss rhetoric as merely style over substance. Elections should be won on substance, but they are often won on style.