Persuasive writing is often broken down into lists of techniques. These lists can be memorised quite quickly without a sense of their utility. This leads in some cases to students who use a wide range of persuasive techniques but a) they don’t really persuade and b) they give an air of falseness to writing. They can name the techniques but don’t have a sense of the real impact of them. These techniques do have a place however, certainly as a bridge to more complex aspects of rhetoric, but I think how they are taught has a massive influence over how they are then used.

To explore persuasive techniques, I think it’s much more interesting to look at them in context, exploring the nuances of different techniques. Students need to spend longer exploring each one, how they work differently in a range of contexts and how they only make sense as part of a design by the writer. Then, when they move to using them in their own writing, students are better prepared. To illustrate how we might do this, I’m going to look at Martin Luther King’s ‘I have a dream’ speech and place it alongside Malcolm X’s ‘The bullet or the ballot’ speech. Seeing the techniques used in different contexts should help students to understand the subtleties.

As Chris Curtis discusses in his legendary sexy sprouts blogs, tone is crucial, and students need to see that any techniques they may spot have everything to do with creating a tone and building an argument. On a simple level, we can read King’s speech as hopeful and optimistic and Malcolm X’s as threatening. However, there is much much more at play than these simple short cuts. (They will be referred to as MLK and MX henceforth)

“I am happy to join with you today in what will go down in history as the greatest demonstration for freedom in the history of our nation.” MLK

“Mr. Moderator, Brother Lomax, brothers and sisters, friends and enemies: I just can’t believe everyone in here is a friend, and I don’t want to leave anybody out.” MX

MLK’s language is grand and sets this up as a momentous occasion. Depending on your interpretation, MX goes for either self-deprecating humour or sets up the tone of division that he wants to create.

From here, both speeches go on to highlight the awfulness of the situation: MLK speaks of “the dark and desolate valley of segregation” and MX talks about how “All of us have suffered here, in this country”.

At this point, the tones diverge. MLK is clear that the solution is “Now is the time to make real the promises of democracy” whereas with MX “it points toward either the ballot or the bullet”. If students can track this crucial distinction in tone they can first of all unpick how the language does the hard work. MLK: the situation is terrible, therefore we must have true freedom and democracy. MX: the situation is terrible, therefore we must have democracy- or revolution. MLK’s evangelical tone builds and builds, sermon-like towards rallying calls. MX, having presented the ‘bullet’ alternative, calls for Lyndon B. Johnson to take action. Despite the angry and threatening tone of the speech, MX’s tone shifts at the end and he proposes a sensible, peaceful set of actions. (MX is reported to have said: “If the white people realize what the alternative is, perhaps they will be more willing to hear Dr. King.”)

With a clear understanding of the shifting tone of each speech, any language analysis becomes much more straightforward and rooted in a clear purpose. Instead of generic ‘it is used for effect’, even simple responses will be specific about the intended effect.

For some reason, this is the technique students always remember and they always use it. Often badly. (“Do you want capital punishment?”) Exploring it in depth and looking at the technique in context shows just how effective it can be. In MLK: “There are those who are asking the devotees of civil rights, “When will you be satisfied?” This question is used for one simple purpose: to set up the rest of the paragraph; to list all the conditions which must be met. MLK poses a question. He then answers it in depth.

Similarly, MX uses “So, where do we go from here?” to fulfil an almost identical purpose. It is used to structure the argument.

The following section from MX shows how questions can be used to structure a paragraph. Note how the last question is only effective because of the examples which precede it.

How can you thank a man for giving you what’s already yours? How then can you thank him for giving you only part of what’s already yours? You haven’t even made progress, if what’s being given to you, you should have had already. That’s not progress. And I love my Brother Lomax, the way he pointed out we’re right back where we were in 1954. We’re not even as far up as we were in 1954. We’re behind where we were in 1954. There’s more segregation now than there was in 1954. There’s more racial animosity, more racial hatred, more racial violence today in 1964, than there was in 1954. Where is the progress?

Anaphora is a mainstay of both speeches. We have established that MX takes a confrontational tone at times and his frequent use of “I’m not here to…” reinforces this (In fact, MX begins many sentences throughout his speech with variations on “I’m not…”).

There’s an interesting point in the speech where this shifts from “I’m not” to “they’re not”:

It’s a wonderful rhetorical flourish and prepares the listener for the alternative. Because once MX has presented this picture, his final paragraph (which uses anaphora also: “let him”) is directed not really at the present audience but at Lyndon B. Johnson: “Let him go in there and denounce the Southern branch of his party.” The use of anaphora has fully supported the tone that we commented on earlier and certainly supports the bullet or ballot argument. After all the ‘not’ (bullet), it feels conciliatory for MX to use the positive-sounding “let him”(ballot).

MLK uses “I have a dream today” as punctuation, an exclamation, a rallying cry. He begins sentences with “I have a dream” to contextualise his hopes for the future. MLK doesn’t spend too much time on the nitty gritty of how this will happen but in many ways he does not need to. The speech is designed to build towards a crescendo and it is the sense of occasion, of emotion which is most important here. The anaphora shifts from “I have a dream” to “let freedom ring” and, much like MX changed the anaphora to change the tone, so does MLK. Still an abstract idea, “let freedom ring” suggests action rather than merely wishful thinking. (Interestingly, King only decided to use “I have a dream” on the spur of the moment. It was something he had used many times before and was memorised- he knew the power it had.)

Working through lists of persuasive techniques, you can provide example after example from these pieces that shows how something is used.

Forget spotting a personal pronoun, explore how ‘we’ is used for opposite purposes in “With this faith, we will be able to transform the jangling discords of our nation into a beautiful symphony of brotherhood” and “We died on every battlefield the white man had”.

Don’t just find emotive language, contrast the proud patriotism of “Five score years ago, a great American, in whose symbolic shadow we stand today,” with “Uncle Sam’s hands are dripping with blood, dripping with the blood of the black man in this country.”

Forget simply metaphor-spotting, what about how King goes from “flames of withering injustice” to “a great beacon of light and hope” and “joyous daybreak”? Then see how X moves from “catching hell” to “the most explosive year”.

I wouldn’t stop teaching these ‘A FOREST’ type lists. But like any aspect of English, we need to give time to explore things in depth for a fuller understanding. 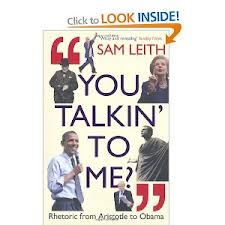 You Talking to Me? by Sam Leith is a wonderful book which has transformed my entire approach to teaching persuasive writing.

Joe Kirby’s blog on Reclaiming Rhetoric is a useful introduction to the subject.