Skip to content
HomeShakespeare and the perception of incomprehensibility 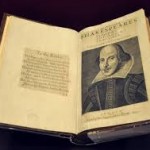 For many students, Shakespeare feels beyond their capabilities and the language seems completely inaccessible. But Shakespeare’s language isn’t really the problem- the majority of words are pretty familiar. The problem is caused by the things that students have to cut through: cognitive overload and the perception of incomprehensibility. Once these are addressed, Shakespeare’s language becomes much more straightforward.

For me, the biggest problem with studying Shakespeare is the wealth of knowledge students need to make sense of everything. Not simply vocabulary but the poetry, unfamiliar concepts, classical allusions, strange pronunciation, jokes which we can’t understand, topical references etc. Many things need to be known in order for a student to fully understand a scene and we can’t just point them all out as we read. Students need to be able to focus on the text without having to juggle a million new concepts. If they have too much to take on, they don’t understand the text and all those old prejudices rear their head.

I would therefore always start by watching the play. In an ideal world this would be in the theatre but most likely it’ll mean a film version. In starting with the complete play, students have the overview of plot, characters, themes etc. This means that the language is more accessible because they can contextualise it. There’s an argument that this spoils the reading of the text. However, surely the knowledge that Romeo and Juliet are doomed is crucial to our understanding of everything that happens before. And let’s face it, Shakespeare tells us that anyway in the prologue!

We should also endeavour to pre-teach some concepts which will unlock key sections of the text. Suppose we were studying The Merchant of Venice. Bassanio describes Portia:

Her name is Portia, nothing undervalued
To Cato’s daughter, Brutus’ Portia:
Nor is the wide world ignorant of her worth,
For the four winds blow in from every coast
Renowned suitors, and her sunny locks
Hang on her temples like a golden fleece;
Which makes her seat of Belmont Colchos’ strand,
And many Jasons come in quest of her.

Students who had previously been introduced to the story of Jason and the Golden Fleece would be able to spot the connection. Reading this extract without that knowledge would completely change the meaning of ‘golden fleece’ and ‘Jasons’. Having to stop here and explain that story takes the students out of the language long enough for them to become disconnected. Shakespeare needs to economically introduce Portia’s status as ‘prize’, establish Belmont as a special, almost mythical place and lead in to the sub-plot of the casket quest. An allusion to the Greek myth does that job beautifully but we miss it all if we don’t fully understand that myth.

This ‘pre-teaching’ can be integrated into the curriculum. For example, in year 7, our students spend time studying Theseus and The Minotaur in one scheme and then read A Midsummer Night’s Dream, which begins with Egeus taking his daughter to Theseus. Instantly, students understand the great authority Theseus wields because they can make the connection. These two examples just happen to be on Greek mythology but there are obviously other examples.

The curriculum needs to be carefully designed to offer these opportunities to prepare for Shakespeare. A poetry scheme of work could easily include Anne Hathaway by Carol Ann Duffy. A scheme on Blood Brothers could contain lessons on fate and tragedy. Rhetoric could be studied in Animal Farm before reading the trial scene in The Merchant of Venice. Vocabulary homework from the previous term could be designed around difficult words to be encountered in the play. Anything you can do to reduce the amount of new information is worthwhile.

The perception of incomprehensibility

Sometimes the biggest barrier is simply the perception that Shakespeare’s language is impossibly difficult so we have to address that. It is helpful to start with something which suggests the simplicity of Shakespeare’s language. Sonnet 130 is a great introduction, as it combines simple ideas and allows students that moment where they ‘get it’. From there, we can unpick other features of the poem without any fear of the language.

Another ‘way in’ to Shakespeare’s language is to choose a part of the play where the audience is being directly addressed, a soliloquy or chorus (more often a character serving the function of the chorus). While Shakespeare is an amazing wordsmith, we can’t forget that he is writing for the stage. Every line is there to convey something to the audience. Ben Crystal, in ‘Shakespeare on Toast’, writes: “People write in sentences, they speak in thoughts.” If students can unlock each thought then they can make sense of complex language and ideas. Take this from Act 5 Scene 5 of Macbeth, following Lady Macbeth’s death:

To-morrow, and to-morrow, and to-morrow,
Creeps in this petty pace from day to day
To the last syllable of recorded time,
And all our yesterdays have lighted fools
The way to dusty death. Out, out, brief candle!
Life’s but a walking shadow, a poor player
That struts and frets his hour upon the stage
And then is heard no more: it is a tale
Told by an idiot, full of sound and fury,
Signifying nothing.

In this soliloquy we get a glimpse into Macbeth’s mind. Each of his thoughts (colour coded) is relatively simple. Looking at the soliloquy like this does cut through that perception of complexity that puts students off. Then each ‘thought’ can be explored, the language analysed and the structure becomes clearer e.g. the layering of metaphors jumps out.

Shakespeare’s language isn’t always easy to unlock but hopefully these things help to cut through any distractions. I definitely feel that I’m still learning when it comes to teaching Shakespeare but I know that my students’ attitudes towards Shakespeare are changing. There is a real sense of achievement to succeeding in something difficult which was previously thought of in very negative terms. I also feel that the enjoyment of understanding a complex text is much better than simplifying things to make it more ‘fun’.

Shakespeare on Toast by Ben Crystal is useful and insightful. His Springboard Shakespeares  are short and packed full of ideas to support teaching.

Here is everything Chris Curtis has written on Shakespeare.