If you have read Teach Like a Champion 2.0, you’ll be familiar with ‘The Art of the Sentence’.

The technique is described as follows:

Ask students to synthesize a complex idea in a single, well-crafted sentence. The discipline of having to make one sentence do all the work pushes students to use new syntactical forms.

Sentences are the simplest mentor texts and students with a command of effective sentence-building tend to produce the best writing. At my school, Dixons Kings Academy, we’ve been starting every lesson with The Art of the Sentence. It’s a simple strategy with a massive impact.

Here is an example from a list of analytical sentences shared by Andy Tharby:

This construction enables-or forces- students to think in a specific way about the text. As students are presented with more and more of these sentence constructions, they will reach for just the right one when they want to think precisely about a concept. 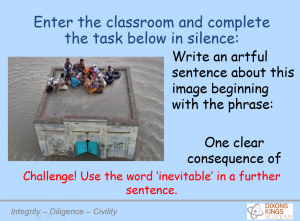 We asked staff to reflect on the habits of thinking we needed to develop in our students and then designed sentences to promote this. For example, in many subjects there is a need to consider and then express cause and effect. Which sentences might help students to develop this habit of thinking? 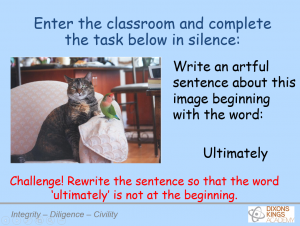 Precision of expression is crucial not just at the sentence level, but at the word level. Most words are learnt from context, not through the teaching of them, and a single encounter with a word will be unlikely to ensure full and rich knowledge. But repeated exposure to a range of carefully chosen words is an approach worth taking. (See Choosing which words to teach) 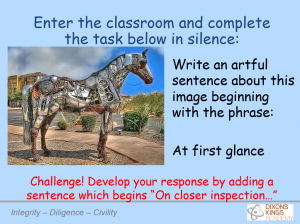 Every lesson starts with an artful sentence. While the sequence can be extended and sentences studied- as I do repeatedly- this can also be completed quickly at the start and the simple routine makes lesson starts more purposeful. I use mini whiteboards, some teachers use computers, some books and some just ask students to think of their response. The immediate habits of thinking and working set the tone for the rest of the lesson: no minute is wasted in the pursuit of learning. Teachers then transition into the teaching of the subject.

Our Director of Literacy took on the mammoth task of creating slides, trawling the internet for interesting and unusual images to use, and designing just the right sentences.

Initially, there were small issues that needed addressing. Some students were using the sentences without the precise meaning. For example, one student in my class wrote, “Ultimately, there is a cat and a bird.”  This follows the instructions of the task, but with no real understanding of why we should use that word. Also, with the wrong image /sentence combination, sentences don’t really work either. “On the surface” only works if there is something deeper that is not on the surface. The first time that students encounter a word such as “inevitable”, it probably has to be explained. The second time might require another explanation but students soon get it.

In one of my recent lessons, students were writing a paragraph comparing Helena from a Midsummer Night’s Dream with a typical Elizabethan woman and I saw this: “Helena differs from a typical Elizabethan woman in a number of respects.” This topic sentence construction had been used on a number of slides. Then, in another lesson, a student wrote: “Ultimately, Romeo is a tragic hero and is fated to die.” I hear the sentences in class discussion and see them in writing with increasing frequency.

So far, we have used the same sentences across the school, but we will shift to making them more subject specific, allowing students to develop the vocabulary and precision of thought in a particular subject discipline. We will also increase the complexity of some of the sentences now that students are grasping the concept. At present, we have been constructing sentences based on images but next will be graphs, extracts from literature, historical sources.

Doug Lemov on The Art of the Sentence

David Didau on The Art of Beautifully Crafted Sentences

Teaching is a job where what we say matters. Our explanations, our questioning, our modelling, our interactions- they all rely on our talk being focussed and effective. We need clear explanations that bring students who know little about something closer to the level of experts and we need to often say just the right thing in just the right way to ensure that students respond in the way we need. We plan powerpoints, create beautiful resources, mark exhaustively, but nobody has ever asked me to practise what I’m going to say.

Over the last couple of years, I have started talking to myself. In the car, in my house, in my classroom. Here’s why.

Above all, I think that we should practise our explanations. For example, this half term my students in year 10 are studying Romeo and Juliet and I recently taught a lesson which was just me and a visualiser. I explained, discussed, questioned and the students and I annotated. Act 3 Scene 1 is a scene most English teachers know well and I am no exception, so I certainly could have winged it. Instead, as part of my preparation, I practised what I was going to do and what I was going to say. I literally sat at my desk at home, annotated the scene and explained it as I would have explained it to students.

This rehearsal allowed me to do a number of things. It meant that I would not be blindsided by phrases such as ‘alla staccato carries it away’ and I could think of my discussion of the tricky layers of meanings of words like ‘consort’ and avoid saying things that I would have to clarify later. It meant that we could focus on Romeo’s response to loss, the essay topic, and avoid too many tangents (I just can’t manage no tangents). Instead of my questions being improvised, I knew exactly where I would ask which questions to which students.

Now, we cannot reasonably be expected to do this for every single part of every single lesson but I know that my students’ understanding of this scene is far stronger than if I had not rehearsed. Most of my practising takes place in the car on the way to work anyway, making the most of that ‘dead time’, so does not add extra hours to my busy day.

I do love the unpredictable nature of students (mostly), but there are things that they say again and again. Sometimes I see teachers who have the perfect response to certain behaviours and comments and I wish I was as quick. Except, I don’t have to be quick-witted enough to come up with the perfect response in the moment– I can script it and practise it in advance.

So what are the things that students always say?

“Can we have a fun lesson?”

“I wish we still had Miss…”

“Other teachers let us…”

“What do we have to do again?”

I’m sure that list could go on. If we don’t practise responses, we have to rely on conjuring up the perfect comeback or reply instantly. And if we don’t deescalate these things, they can build up and destroy lessons. I have polished how I reply to “Can we have a fun lesson?” to such a fine art that we can always quickly move on.

It isn’t just what they say. It could be dealing effectively with a late student or someone swinging on a chair. Dare I say it, we might even admit that sometimes behaviour across the class is not acceptable and they need a stern reminder. Practising this is not saying that we want it to happen, or that telling off a class is something great, but that if it has to happen we don’t need to be angry and frustrated, making things worse with an improvised speech.

When I deliver a training session to staff, I like to rehearse it at least once as it makes me familiar with the material. My main reason for saying the thing out loud is it often forces me to consider how what I say is received and allows me to explore whether what I am saying is, well, nonsense. We can often write eduspeak and add received wisdom into what we say. Sometimes I catch myself saying something that I don’t actually think or couldn’t justify.  And there is also the unfortunate business of that extra bullet point on a list that you had forgotten about…

Sometimes a difficult conversation needs to be had. There’s nothing worse than addressing a legitimate concern but phrasing it wrong or waffling on to another topic. Before you know it, the conversation is no longer about the one thing that it probably needs to be about. Whether this is with a colleague, a student or a parent, a little bit of practice beforehand will ultimately help the conversation to go where it needs to.

When I attended Teach Like a Champion training in October, these principles of practising talk were clarified and focussed for me. Teaching is a profession where saying the right thing is crucial. From our lessons to our meetings, our training sessions to our calls to parents, talking is teaching. So why leave it all to chance?