One of the major changes I have made to my practice is the focus on redrafting. I have been clear to insist to students that they must redraft their work. Often, this is following feedback from me or from their peers. I use strategies such as Kelly Gallagher’s STAR Revision. 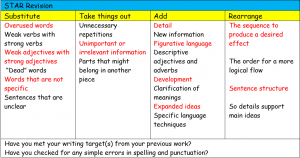 I’ve been using it at the end of the first draft but I’m becoming increasingly aware that the best place for revision of writing is during the writing process and there are a couple of reasons why.

First of all, those students who think deeply about their work make some significant revisions but it has to be said that many don’t. They change the odd word here and there but their final drafts are very rarely significantly different from their first.

Also, our younger students are going to be writing in examinations where they do not have the time or opportunity to redraft. They need to be able to revise as they go.

Now, I do acknowledge that I need to be better at teaching the skills needed for redrafting but these are actually the same skills needed for students as they write their first drafts. To get students to the point where this is natural takes a lot of work:

Modelling is massively important. This includes looking deeply at mentor texts, sharing high quality examples, but it is crucial that we also share the process. We model the mistakes, the rewording, the adding. Students need to see this process constantly and feel that it is an entirely natural process. I would always share high quality writing but good writers are experts in hiding their mistakes. The video below is made using screencast-o-matic.com and it shows me revising a paragraph on Animal Farm.

I like making these videos because they are under my control. I can prepare exactly what I want to show. I do also model from scratch in the classroom which does show a messier process. It should feel as natural as possible.

Students can’t only practise revision during these sessions of extended writing. They need to practise relentlessly and they can do this by focussing on small texts. I have said before that sentences are just small texts and they are a quick and easy way of modelling writing and the revision of writing. I really like Andy Tharby’s sentence escalator as it is such a great way of highlighting the revisions that we can make. By working on such a small level- the sentence level- we can be highly focussed and students don’t need to feel overwhelmed. Then they just build their writing sentence by sentence, revising as they go.

Also, it is perhaps a better use of time to ask students to redraft a small part of their text but do so multiple times than a redraft of a 3 page essay.

Students need to be taught that the best word is the right word, not the longest. Some of the worst writing is created next to a thesaurus. Let me rephrase that:a quantity of the most evil inscription is fashioned subsequently to a lexicon. This leads to comments like ‘The Birlings live in a cumbersome house in Brumley’. Frankly, ‘large’ would have been just fine.

To help, I would teach vocabulary which will help them explore nuances e.g. when writing about characters in a book. This might mean taking a list of synonyms for ‘kind’ and asking ‘Is Lennie caring or compassionate?’, ‘Is George gentle or humane?’

I’m starting to become wary of thesauruses anyway because they teach a kind of learned helplessness. They also add way too much time when the words will probably not be used properly anyway. I can see them as a way to avoid being overly repetitive and students should be exposed to new vocabulary but they don’t pick up the nuances of words from the thesaurus.

When you look at revising words, it isn’t just making them more complex- although there is a place for this- it’s about making the words do more. If you look at verbs as the most ‘powerful’ parts of a sentence, you can use those as a lever for transforming writing.

Give students sentences with words changed. Ask them about the differences. You could start with clear differences:

or make it harder to distinguish:

When they have practised this way of thinking, they can play around with verbs- and other words- in their own writing. This idea of giving options is explored beautifully in Chris Curtis’ Techniques for Dummies. 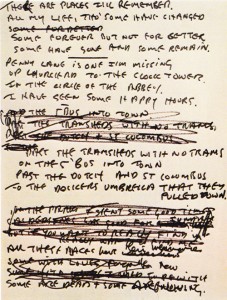 It is great to be able to find real drafts of writing. For example, I like placing a copy of different drafts of ‘Anthem for Doomed Youth’ and focussing on which might be the final draft and why. I wouldn’t normally teach song lyrics but I think Beatles lyrics might be ok. You can look at the original song lyrics and how they changed e.g. the original lyrics for ‘In My Life’ pictured. The purpose of all this is to show that writers change their mind and it isn’t always to ‘add more detail’ or swap words!

One of the skills to focused writing is knowing exactly what you want to say and the way you wish to say it. If there is a clear tone, then each part can be sculpted to fit that. If there isn’t a tone, then writing can be flabby and unfocused. Similarly, essays with a clear thrust can be revised so everything feeds into the thesis. The best way to teach this idea of tone is to read examples of writing with clear tonality. When reading anything, build habits of looking for tone and writer’s ‘voice’. You can compare extracts like the two below and examine the differences in tone and purpose:

Rather a stately house of its kind, but dolefully in want of painting, and with dirty windows. He took out his key and opened the door, and we all went into a stone hall, bare, gloomy, and little used. So up a dark brown staircase into a series of three dark brown rooms…The furniture was all very solid and good, like his watch-chain. It had an official look, however, and there was nothing merely ornamental to be seen. Great Expectations

They could compare this with:

The property has over the past four years been the subject of a meticulous project to create an exemplary private residence to an exacting specification complemented by luxurious fixtures and fittings throughout. At the heart of the property is the stunning bespoke family dining kitchen designed by Park Royal Interiors Ltd who were also responsible for overseeing the design of the bathroom suites. The property also boasts under floor zoned central heating together with an integrated Sonos audio system, Rako lighting and Cat 5 installation. The external appearance is complemented by Accoya folding door sets with eclipse advantage double glazing. Rightmove.co.uk

It may seem ridiculously obvious, but many students do not read their work back to themselves. They may do a quick check but they don’t reread with purpose- or at least they won’t if we don’t teach them to. When they reread, they should be looking for clarity, for style, for syntax and rereading for errors. When I’m sending an email, I will often read the email out loud to check the tone- it can be awkward if an unintended tone comes through in your writing. I also have to proofread a million times- I only just spotted a ‘form’ instead of a ‘from’ in this blog.

It can be tempting to draw up a rudimentary plan, but the idea of a plan is to ensure that the whole piece has that sense of focus mentioned above. It is in the plan that much of the structural work on a text has to be done. With a solid plan in place, it could be argued that your first draft is a kind of second draft. I would love to suggest a particularly innovative planning format but I would just use a mind map or a variation on it.

Other aspects to consider:

Cohesion– how does the overall text hold together?

Detail– we can model the ‘add more detail’ part by elaborating on ideas, clarifying ideas, looking into alternative viewpoints.

Introductions– provide many models of introductions and encourage students to revise their introduction after the piece is completed.

Everything that I have written could be in a post on redrafting so by teaching the skills of revision, we have also taught the skills for redrafting. Now, if students go on to redraft the work, they are in a strong position already and better prepared for the next draft.