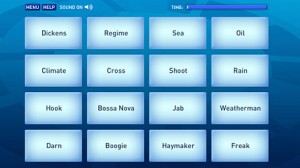 Fittingly, the idea for this blog post came through a series of connections. Through the power of Twitter, my blog was linked to from this blog from @plestered.  I watched the video on the site and in it the teacher Andy Smith spoke of the way that he finds inspiration for his lessons from TV quiz shows.  Right at that moment I was watching Only Connect on BBC4.  An idea was hatched…

So I stole the word wall idea from the show and created a fairly simple starter activity.  Simple in that it was easy to make but it led to very complex thinking.  You can play some of the word walls here.  The idea is that there are 16 words and the teams must place them into 4 groups of different categories.

In my lesson, I just wrote down 16 things from Of Mice and Men.  Mainly characters, but I threw in some other ideas.  Here is what I made.  It took me about 5 minutes. onlyconnectOMAM

Making connections is an essential higher order skill.  It is explicitly in the markscheme for Band 5 in GCSE English Literature:  “make a sustained discussion of links and comparisons between texts; make apt selection of details for cross reference; at the highest level, make subtle points of comparison and probe links confidently.”

Crucially, the need to make four groups means that a) pupils have to reconsider their ideas and reject some ideas and b) there is some real divergent thinking when students end up with 4 seemingly unconnected ideas.  I was very clear in saying that I didn’t plan any connections so there was no point in asking me ‘is this right?’

It is a brilliantly differentiated activity too.  If I give 4 characters and ask what they have in common or which one is the odd one out, I have restricted the number of answers.  It is also easy to fall into the ‘read my mind’ teacher mode where there is an expected answer.  In trying to find 4 groups of 4, some students can make simple connections and as the options decrease the challenge increases.  Below is an example from one of the students.  The second answer led to a great discussion in class. 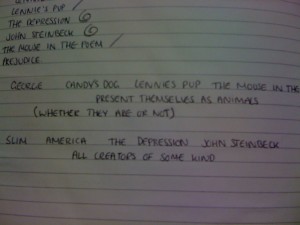 I also asked the students to solve a wall from the show (wall 2) and they loved it, although the word ‘gimlet’ sent one student into uncontrollable fits of laughter!

I am pretty sure that this sort of thing has been done many times before in classrooms up and down the country but I love stumbling upon things like this which are easy to create but lead to some complex thought.

Here are further ideas to connect

Hexagons are all the rage.  I love Think Link from Triptico for this and it’s even better because the demo board is based on OMAM.  You can laminate hexagons or use hexagonal post-its.  If you ‘explode the node’ and write a paragraph based around the intersection then it will be ready made with lots of detail.

Triangles are equally useful.  Write whatever you want on the side and ask students to connect.  You can have planned answers with some red herrings or just make them random and see what happens.

I can’t remember where I have stolen this from but if you just write a bunch of words on a page scattered out then students have to draw connections.  They can then write up their findings easily by starting at one point and exploring all the links.  Here is an example from Romeo and Juliet: RandJWordList

How is _______ like a ___________?   Set up a random name selector to pick a character and another to pick a thing.  Or pick them out of a hat.  How is Lennie like a tumble dryer is my favourite so far? “He breaks down/ powerful/needs someone to control” etc.  You can do this in so many ways.  Take two random things and find the connections.

Six Degrees of Separation from @fullonlearning:  Give a starting point and an end point.  This could be images or other stimuli. Students have to get from one to the other in six (or more or less) steps.  This is just one of many excellent ideas on connections and creativity from Zoe Elder’s ‘Full on Learning’.  I used it recently with quotations from Dulce et Decorum Est.  Another way is to turn this into a loop so the last step links to the first step.  This episode of ‘Wikiwars’ is another interesting way of approaching it:

Draw up a grid or create a Blockbusters style honeycomb and challenge students to get from one side to the other by making connections between words/ topics etc.  You could be ambitious and set up a room with ‘stepping stones’ on the floor.  Students can move to the next one only with a valid connection.  The next one across cannot go exactly the same way.

Teach connectives:  As an English teacher, I feel that students who can use a wide range of these can articulate ideas and explore connections easier.

Magic square: arrange topics in a 3×3 grid.  Pupils get a point for every connection they can make: horizontal, vertical, diagonal and 4 corners.

One thought on “Making Connections”