Skip to content
HomeWithout Apology
Pupil: Why are we doing this?
Me: You have to do this because it’ll get you a C.
Pupil: But it’s boring.
Me: Yes, you’re right. I’m really sorry about that. I don’t decide what’s in the exam.

I have had that conversation- or a version of it- with so many students over the years. 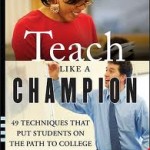 Recently, I have been dipping into ‘Teach Like a Champion’ by Doug Lemov.  It’s an American book and at times is geared towards their school system.  However, there are a large number of simple strategies that I have found very interesting.

One of them, ‘Without apology’, is the idea that we shouldn’t undersell the importance of things.  We shouldn’t assume that something will be boring.  We shouldn’t blame things on an unseen ‘they’.  We certainly shouldn’t dumb things down e.g. ‘It’s okay to use a contemporary song to introduce the idea of the sonnet.  It’s not okay to replace sonnets with contemporary songs in your study of poetry.’

He goes on to list some alternatives to apology:

‘This material is great because it’s so challenging.’
‘This can really help you to succeed…’
‘This gets more and more exciting as you come to understand it better.’

I have tried this strategy with all my classes this year.  Where it has had the most impact is with my GCSE classes preparing for controlled assessment.  I really struggled last year to get my students to produce CA pieces of a high enough standard.  Part of this could have been because I always told them that we had to get through those boring bits and that I hated it too.  This year, I feel a change of emphasis has really helped students understand why they are doing what they are doing.

My year 10 class, for example, are not studying spoken language because they have to (even though they have to).  Instead, they are studying it because:

The way we speak is a fundamental aspect of who we are
They will do really well in their A levels if they get their heads round it now
Spoken language is all around us and is endlessly fascinating
People judge us by the way we speak- some people think they speak funny
It’s actually quite fun to identify false starts and fillers, especially in their teachers’ spoken language
Oh, and, they need to do it for their GCSE!

Thinking on a wider point, how often do we hear a staff training session begin with something like ‘We need to do this because Ofsted will be looking for this.’  Maybe they will, but if they are looking for it, then there are likely to be some merits to it.  Think how much we get demotivated by that kind of approach to our own learning as teachers.  Doing the same for students must have an equally demoralising effect.