‘What students think about is what they will remember.’ Daniel Willingham

I had a lesson this week which seemed to be successful: students worked hard, produced lots of work and some great poetry. When I reflected on exactly what they had learnt, I realised that they had no real understanding of what a sonnet was. It wasn’t exactly a lesson wasted, but the fact was that they had barely concentrated on the main point.

In Visible Learning and the Science of How We Learn, Hattie and Yates state that “…learning occurs effectively once the mind responds to a meaningful experience through making a meaningful response.” Lessons must be constructed around the thinking that we want to take place, otherwise they don’t learn anything. In the example above, I wanted the thinking to be about the sonnet form, but students actually thought about the content of their poems.

Thinking deeply about things causes learning, so how do we ensure that students spend time thinking about the things we want them to think about? Here are some ideas for what- and what not- to do.

Dylan Wiliam makes the point that ‘Feedback should cause thinking’. The best feedback makes students think deeply about what they have to do next. A bad example is in one of my previous blogs on feedback. I suggested ‘coded feedback’ as a way of getting students to interact with their feedback- feedback is written in a code they have to crack or in a foreign language they have to translate. In fact, what they will do with that is think about the coding system for the majority of the time and then think about the feedback for just a tiny bit. We spend so much time giving feedback but if they don’t actively think about it they will not really improve. So when we give students feedback it needs to ensure that they think, and we need to give them time to do so. This post on making feedback stick from David Fawcett is particularly insightful on this.

I created an amazing lesson once when studying poetry. I split the class into groups, gave them some 1 pence pieces and some ideas on the poem. They could trade ideas, buy some thoughts from me, come up with their own ideas. A colleague walked by the room and thought it was fantastic. I had a real sense of achievement. But…by the end of the lesson, one student had all the coppers and only two or three students had annotated their poem. I think some had not even read it. We tried to write about the poem in the next lesson but of course they had not thought about it for long enough to provide the responses that I had hoped- they had been thinking about the elaborate task. I had spent so much time on making it exciting and interesting that I was blind to the fact that they would not really learn about the poem. Perhaps it was a fear that the subject was not exciting in itself. Now I realise that poetry is exciting and studying it in depth is much more interesting and too much on top of that only ensures that they think less about poetry.

I think that lessons can often contain quite a lot of filler. When we plan lessons, it can be tempting to try to fill time to make things last for an hour so that everything fits together but learning is messier and can’t fit neatly into organised chunks. Lesson design benefits from ruthless editing. Ask what students are learning at each stage, what they are thinking about, what they might end up thinking about instead(e.g. they might be thinking about getting the bubble writing just right on a poster). If you ask those questions and can’t justify the task then- CUT!

Whichever techniques you wish to use- lollipop sticks, random name generators or just picking yourself- you need to make sure all students are thinking when you ask a question. I know how easy it is to ‘hide’ in lessons because I used to do it myself. (Don’t put your hand up and everything will be fine.) Good teachers use questioning to ensure that every student thinks. Students can’t be let off the hook either. Stay with them even if they say ‘I don’t know’. Expect them to think.

I am an advocate of teacher talk and will argue with anyone who suggests that I shouldn’t do it. It can also be one of the worst things that goes on in classrooms. Teachers are experts, so why shouldn’t they speak to the class? However, the best teacher talk is designed to make students think. Highly skilled questioning, modelling, explanations which tell wonderful narratives are all ways of ensuring students think. I learn a great deal from watching and listening to presentations from speakers who make me think.

If you are putting students into groups for a task, ask yourself whether every student in the group is going to think about what you want them to think about. If they won’t, then don’t do group work.

One of the trickiest things with new technology is that students will spend quite a bit of time learning how it all works and trying things out. I used a google doc recently for collaborative writing in the classroom which was an unmitigated disaster if I’m honest. The time spent getting used to how it worked, the increasingly ridiculous user names, the messages, the rogue deleter, the accidental deleters, then the blocking of the site. Did the class think about Dulce Et Decorum Est? Nope.

This doesn’t mean that we should just give up. It does mean that if something is worth using then it needs to be used routinely so that the novelty wears off and the benefits kick in. If there is going to be a lot of time written off to bed things in then it isn’t worth it.

If students have to think about too many things, they will become overloaded and won’t really think deeply about anything at all. Too many new ideas and they are overburdened, too many new words and they cannot comprehend the big ideas. As teachers, we need to reduce the burden of cognitive load to ensure they are able to concentrate on the thing we want them to concentrate on.

“Learning, as a language based activity, is fundamentally and profoundly dependent on vocabulary knowledge.” *

This is the first in a series of posts about vocabulary.  Some practical teaching ideas will follow.  Here, I discuss the necessity for a focus on vocabulary as a method of ‘closing the gap’.

‘The Matthew effect’, coined by the sociologist Robert K Merton, is the idea that the rich get richer and the poor get poorer.  This is certainly the case with students’ vocabulary.  Hart and Isley’s study suggests that those in lower socio economic classes begin school knowing fewer words than their peers and that gap gets larger throughout their education.  “Differences arise early, and the vocabulary gap between students grows larger over time”. (Baker, Kameenui  1998) A reasonable estimate would be to say that at the end of secondary school, high performing students know about 4 times more words than their lower performing peers.

In order to explore why this gap increases, it is important to understand how we build knowledge.  According to Daniel T. Willingham, the more we know, the easier it is for us to take on new information.  Our ‘working memory’ is the place where we store new ideas and our ‘long-term memory’ is where we keep our knowledge.  The more students can access knowledge from their long-term memory, the more space they have in the working memory for working with and processing new knowledge.  “…background knowledge allows chunking, which makes more room in working memory, which makes it easier to relate ideas, and therefore to comprehend.” (From Why Don’t Students Like School)

Steven A Stahl states, “Vocabulary knowledge is knowledge; the knowledge of a word not only implies a definition, but also implies how that word fits into the world.”   When we are dealing with vocabulary, we are merely dealing with a particular kind of knowledge.

Now, suppose two students are tackling a challenging text.  The word-rich student will only need to juggle perhaps one or two new words whereas the student who knows fewer words will have to keep several new words and concepts in their working memory.  The former student is much more likely a) to comprehend the text and b) add the newly introduced words to their vocabulary.  More vocabulary begets more vocabulary.

It isn’t just about reading- a wider vocabulary is helpful for students to be precise in their meaning.  It is possible to be understood with a fairly limited vocabulary- I can get by in France because I have a basic French vocabulary.  (See the Up-goer 5 project  and this article for an idea of how we can communicate with only a basic vocabulary.)  However, think of the synonyms of a word like ‘sad’: depressing, gloomy, miserable, cheerless, distressing, heart-breaking, poignant.  None of them are true synonyms- they all offer degrees of meaning.  This kind of precision is essential in writing and in thinking. To get the level of sophistication required for academic success, students need the vocabulary to deal in these degrees of meaning.

Because of the uncertainty of any causal link, it is difficult to come up with the definitive way of making students learn vocabulary.  E.D. Hirsch states that ‘the fastest way to gain a large vocabulary through schooling is to follow a systematic curriculum that presents new words in familiar contexts, thereby enabling the student to make correct meaning-guesses unconsciously’.  He is against the memorizing of word lists etc. He explores his ideas on vocabulary at length here and I would thoroughly recommend reading it.

There are arguments in favour of more direct vocabulary instruction, however.  The method above may not always be the most helpful for students who are ‘word poor’ and there may be a need to spend time explicitly teaching vocabulary.  Indeed, we cannot rely on students always being able to make these ‘guesses’.  For example, the ‘command words’ below would likely need to be explicitly taught rather than discovered. 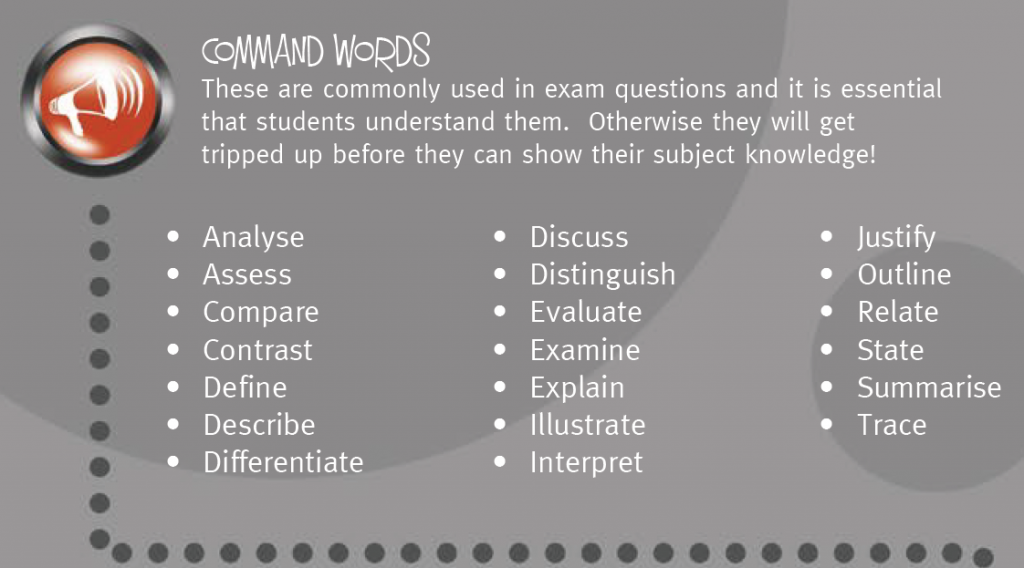 In practice, I think that we should explore a range of strategies to close the vocabulary gap:

* From ‘What Reading Research Tells Us  About Children With Diverse Learning Needs’: Baker, Kameenui 1998