With so many quotations to consider learning for GCSE English Literature, we have to find ways to prioritise and the best quotations to focus on in our study are those which are high-utility – they can be used in a wide range of essay questions and they offer lots of exploration for analysis and links across the text.

One example of high-utility quotations are images which help us move from evidence to essence, the quotations that take us right to the heart of a theme or a character. We can say lots about them on their own or in the scene they appear, but they also allow us a lens, a viewpoint, to deal with the character or theme across the text.  I’m going to illustrate this with examples from Romeo and Juliet.

Tybalt is a storm

In Act 1 Scene 5, Capulet asks Tybalt, “Why, how now, kinsman! wherefore storm you so?” when he is enraged by Romeo’s presence at the ball. Shakespeare’s use of the word ‘storm’ is so apposite because not only does it describe how he is feeling and acting at this moment in the play, but it encapsulates the character so perfectly. And by using this lens, we can then explore the storm and how it is seen elsewhere in the text. If we think of the way a storm builds, the way we can see the sky darkening and the air changing, so we can feel Tybalt’s dark presence on the rest of the play. He’s only in three scenes (if we exclude his corpse in Act 5 Scene 3) and speaks 17 lines and a total of 205 words, yet we know he is lurking, ready to enact revenge. The storm brewing is a symbolic reminder too of fate and the presence of death introduced in the prologue.

Now for some further interesting ideas. The only other use of ‘storm’ in the play is in Act 3 Scene 2. Juliet asks “What storm is this that blows so contrary?” as she takes in news of Tybalt’s death. Then Capulet, seeing Juliet’s tears in Act 3 Scene 5, states “But for the sunset of my brother’s son/ It rains downright.” The storm has ‘passed’ but the rain has started!

Romeo has a soul of lead

In Act 1 Scene 4, Romeo states “I have a soul of lead.” There are lots of things we can say about this quotation and how it shows how Romeo is feeling, we can analyse the connotations of lead, what it means to have a heavy soul etc. But moving from evidence to essence, this image encapsulates Romeo as someone who cannot escape a burden. Take this, and we can explore the various ‘burdens’ that Romeo carries, the things that weigh heavy on him:

You can see how useful this image is a wonderful springboard for exploring a wide range of ideas across the text. In Act 5 Scene 3, Romeo speaks of a “lightning before death” and it is only with his death that he relinquishes the burdens. There is also the huge ‘burden’ of the genre and the fact that Romeo, as a tragic hero, is bound and beholden to the rules of the tragic hero. His burden is his hamartia, his fatal flaw: impetuousness.

Romeo’s final soliloquy in Act 5 Scene 3 is up there with “To be or not to be…” and “Tomorrow and tomorrow and tomorrow…” in the realm of Shakespeare’s greatest explorations of life and death. In here, death is many things: a conquering army; a monster; a lover; a monstrous lover; a pilot; a guide. A good exercise with students is to consider which one of these best encapsulates the idea of death in the play – which image gets to the essence?

We can do the same for love. Is love best encapsulated as “a smoke raised with the fume of sighs”, “a fire sparkling in lovers’ eyes”, “a sea nourish’d with lovers’ tears”, “a madness most discreet”, “a choking gall” or “a preserving sweet”? Or something else entirely?

These are images that are explicit in the text. We can find others, some of which work well to encapsulate a character e.g. “solitary as an oyster”* and some less effective – I’m not sure if “Juliet is the sun” is the best to get to her essence, perhaps “yet a stranger in the world” is better? We can also think of our own metaphorical lenses to view characters through. An example of this I use is that Jacob Marley is a mirror. While not explicitly stated in the text, we can view him as a mirror to Scrooge and a mirror to the reader. By seeing him like this, it elevates our responses a little and helps us to explore Dickens’ intentions and the context a little better.

What do you think? Which images from texts you are studying best encapsulate the characters/ themes?

*Not from Romeo and Juliet, although I would like to see a cameo from Scrooge in the play. 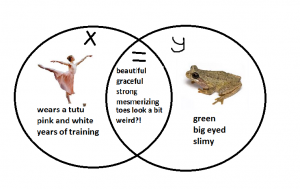 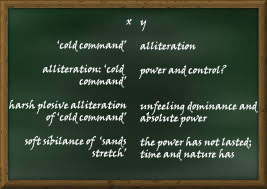