Skip to content
HomeThe books that fall through the cracks

For a long time, I have said ‘look at my books’ as the clearest indicator of what goes on in my classroom. They provide a clear narrative of the lessons, the effort, the feedback.

And yet we have had a work scrutiny with a random sample this week and I have found myself hoping that certain pupils’ names are chosen. The ones who read and act on the feedback, the ones who attend regularly, the ones who underline the title! And there are a small number of books I don’t want anyone to see- the books that fell through the cracks.

Part of me wants to criticise the work scrutiny process but I think it’s better to question why I have any books that I don’t want to be ‘scrutinised’. So I’ve chosen a sample of two books from one of my classes for a closer look. The first is the book I’d most like to show off and the second is the one I hope is never looked at. 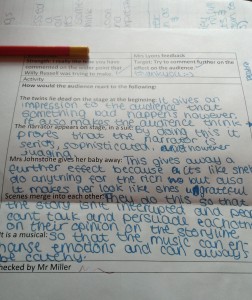 This student engages in feedback. Every single time that I have provided feedback they have addressed it. There is regular ‘dialogue’ with me. Comments like ‘Thanks Sir’ and ‘I’ll make sure that I do that in the next draft’ show this. I often provide feedbactivities– tasks to support their targets- and these are always approached with determination to improve.

This student also ticks every error to show me that she has read it. It’s an interesting habit and one it is worth trying to instill in others.

It isn’t perfect because there are still misconceptions. They could use a ruler more regularly and they appear to have used the last page of the book to practise their signature.

All in all, this book shows off the impact that good feedback has when it acted upon. The student is making progress- evident in the book and the data. If you judged me on this book, you would have to say the quality of my marking is high and the student is making excellent progress. Match it to the data and it would corroborate that.

At the opposite end of the spectrum is the next book.

It is a book that starts on the 11th of March. It’s a replacement for the first one which was lost. (I didn’t lose it, although students’ books do go walkies sometimes). All that evidence of progress and all that feedback is missing. Yes, I have a markbook with data recorded and all of the previous targets but there is no evidence of it in the book.

Worryingly, there’s not much from me in the book- at least not in pen. They have missed the key assessments and so some pieces of work are acknowledged but not given particularly developmental feedback. There are two feedback sheets. They at least provide evidence that I’ve done something. However, looking at the sheets tells another story- the feedback didn’t really count.

First of all, they are not really engaging with the feedback at all. In the second image, the minimum is completed before scribbling all over the page. 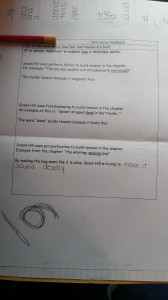 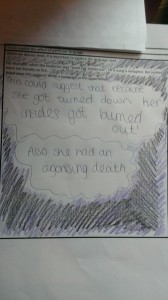 The attendance of the second student is not high and they have missed a number of lessons for a number of reasons. A couple of feedback sheets have not been glued in so must have fallen out of the book. I’m not suggesting we should make excuses like this and avoid trying to address the issues but it does provide context.

If you judge me on this book, you could argue that this is not good enough. Is that fair? I don’t think it would be fair to say this was indicative of the average student in the class. Looking through the pile of books from the class, most are close to the first one but there are quite a number of instances where the feedback is not really engaged with, there are a few feedback sheets not stuck in, there are the times when people were absent. If you look at every single book you will see a consistency and lots of evidence of good practice. It would be fair to say that this student is not visibly making good enough progress, that they are not engaging with the feedback and that I don’t seem to have addressed this well enough.

I put a lot into my marking and if book two was chosen in a sample I’d end up having to defend myself and make all of the aforementioned excuses.  It’s hard not to feel a little defensive. (Perhaps it’s that word ‘scrutiny’) Whereas, in writing this blog, I’m asking myself why I have not picked up on this sooner. Why has it taken me nearly three months to pick up on a student who has not properly engaged in feedback in that time?

An idea for a developmental way of looking at exercise books would be to do as I have above. Select the best and ‘worst’ books from a class. Reflect on what the books show and how the issues can be addressed. This could be done as a something more formal, as part of staff or departmental training or just as an individual. Some may say that it doesn’t show the true picture- nobody is going to pick the worst book. I think it all depends on how it is framed. If people are working in a culture where they feel their development is valued and this is not simply a judgemental approach, I think they’ll embrace it fully.

Work scrutinies are important for a number of reasons and they can provide much useful information. If conducted well, they can be very helpful in developing practice but we’ll get much more out of it if we take a good look at our own books and start with the dog-eared, graffiti-covered, why-have-they-only-used-the-right-hand-pages books that have fallen through the cracks.

In this similarly reflective post, I looked at the impact of my feedback.